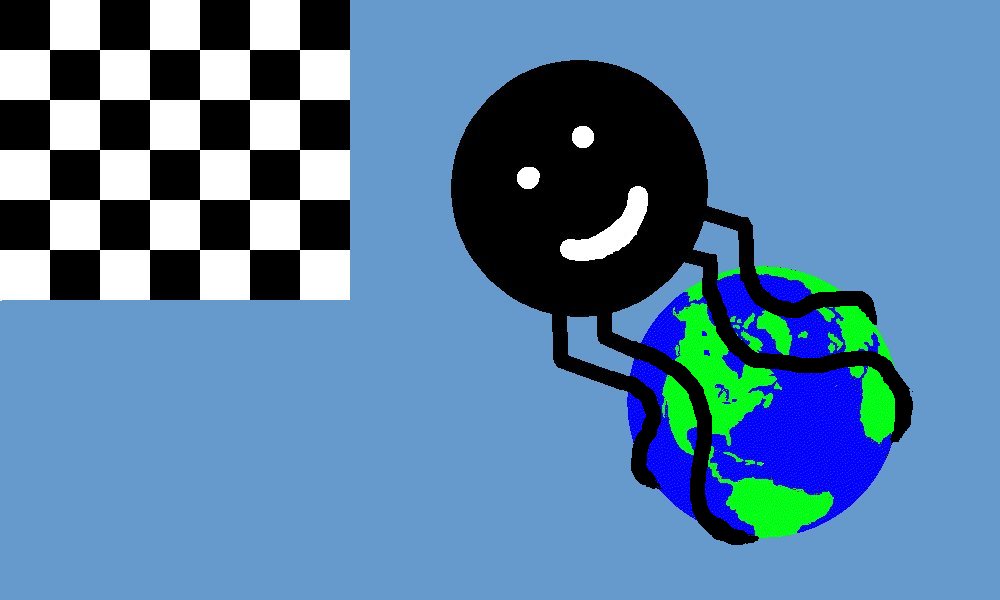 Just two days after the successful completion of last weekend's Operation Red Football, the Domination of Eiler goes forth to conquer once again. The Domination Guard has assembled an armored and cavalry combined-arms expeditionary force to expand the Domination's borders.

The Domination has designated this operation as "Edgeland", because these new conquests are at the edges of Illinois, Missouri, Iowa, and the Domination itself. The primary target is the Mississippi River town of Hannibal-Missouri. That town is almost entirely dedicated to the memory of the pre-Domination writer, "Mark Twain".

Hannibal was chosen for occupation because:

Nighttime deployment out of the Core Territories toward Missouri was a concern, because traffic is lightest toward Iowa. (Go figure.)

Domination forces were on station at Normal-Illinois, halfway to Hannibal, at 7 pm. Provider "Best-Western" on the north side of town was chosen for barracks.

The Domination force moved out in excellent order, and was conquering new territory west of Springfield-Illinois by 11 am.

In that sparsely-populated land, the campaign encountered resistance - but not the usual sort. Instead of turning out in force to oppose the Domination's advance, the residents hid themselves - and their gas stations. At one point, Domination forces had to stray five miles off the highway for refueling. And so was Pittsfield-Illinois raided.

The weather also provided some opposition.

Despite opposition, by 1 pm the Domination established its mission objective: a garrison in Hannibal-Missouri. (Operational music "One More Time".) Barracks "Hotel-Clemens" was chosen. 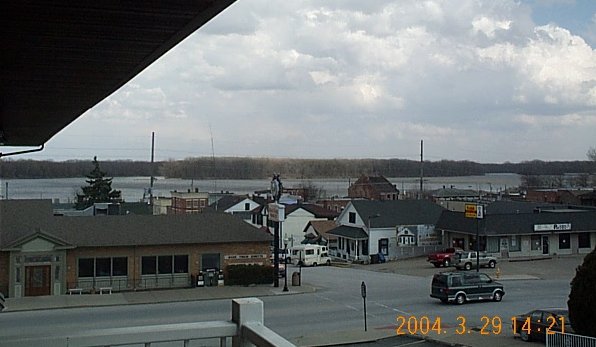 Lunchtime mess hall at Lula Belle's Restaurant and B&B. This would have been an interesting lodging choice, were it not adjacent to an active railroad track. Sadly, Lula Belle's doesn't believe in draft beer.

Museum activities followed, with a Mark Twain theme, of course. Hannibal-Missouri is cashing in its Mark Twain meal ticket for all it's worth. 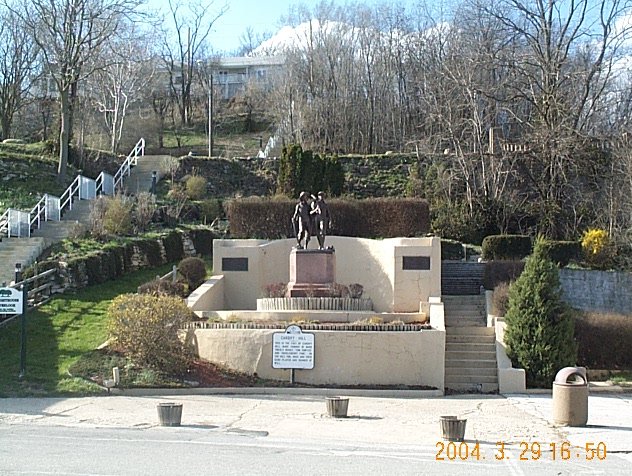 The Hannibal Lighthouse was then conquered, along with a Missouri-stick for the Dominator's personal collection. 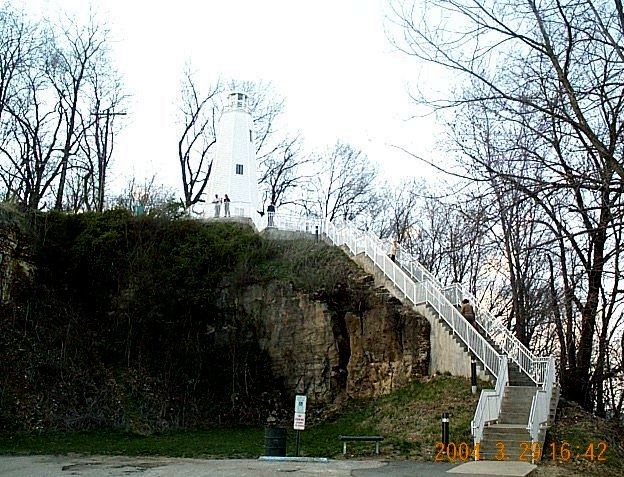 An extensive bicycle maneuver followed, penetrating five miles further on into Missouri, then returning and going two miles south. Objective was to find a dining establishment which served a draft beverage superior to the Bud Lite of St. Louis. Sadly, no such establishment was found.

Then, dessert at Lula Belle's, since the Mark Twain Dinette (home of Mark Twain Fried Chicken) was closed for the night, it being 8 p.m. and all. 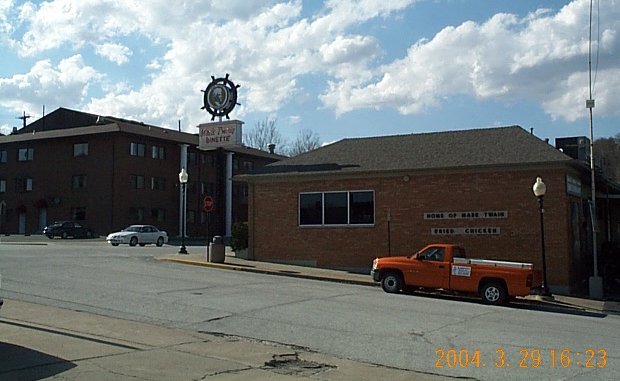 The Domination plan was to spend two nights in Hannibal, while soaking up the sights. There are still more sights, but the restaurant selection's been exhausted.

Oh well, more time to dominate up the river from here. Local intelligence says, nearby Quincy-Illinois has great architecture and lots of wealth; it's just that Hannibal has the marketing. For instance, it was Hannibal which realized that TOM-AND-HUCK is a toll free number.

Objective for the day was to clean up outstanding targets in Hannibal-Missouri.

Prime target was the Mark Twain Cave, two miles south of town. The Domination recommends this target to all its citizens... but don't get there at opening time, because they'll just make you wait half an hour in the gift shop. 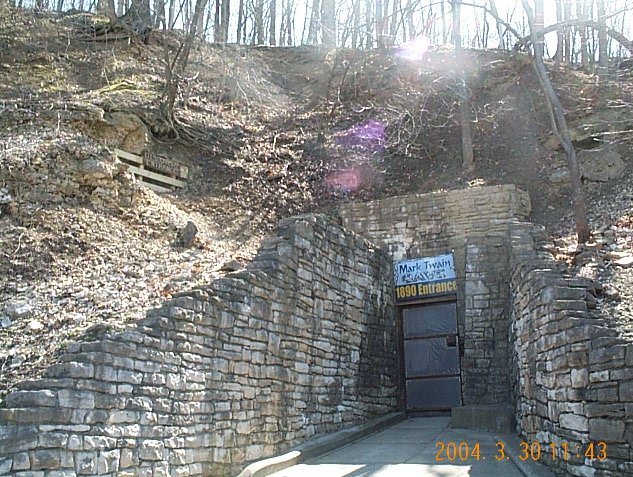 The Domination subdued as much of the underground structure as the native guide allowed. Then, the Domination Guard infantry force subdued the entire cave hill.

The Domination then cleared up remaining resistance in Hannibal-Missouri.

Secondary target for the day was Quincy-Illinois. Domination forces re-crossed the mighty Mississippi River to subdue Quincy from the east. 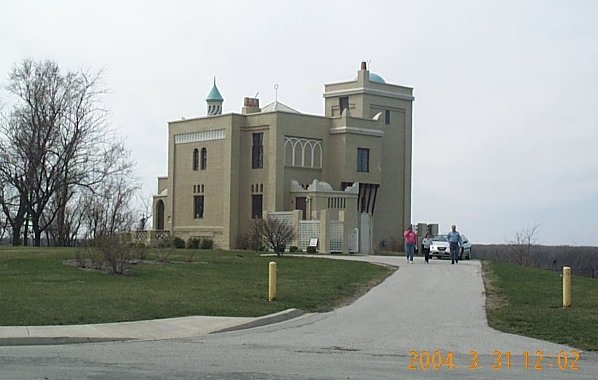 It actually looks prettier without furniture.

Passport photos were also conquered before leaving town. One never knows when one might have to cross a nation-state border.

But note, the history of Nauvoo is all Mormon history. The town is even more dedicated to the Mormon cause, than Hannibal is to Mark Twain.

Domination forces therefore chose not to establish a garrison in Nauvoo. Instead, the armored force drove upriver to the target-of-opportunity Fort Madison-Iowa... which is garrisoned by an Iowa State Prison. As such, Fort Madison's ambiance is somewhat less creepy than Nauvoo's.

It is always a pleasure for the Domination Guard to swap stories with its local militia - in this case, newly-enlisted Domination militia at the Lost Duck Brew Pub. And the Domination has to admit, it got pranked today.

Domination mission reserves of Eiler-Hours are getting low, especially since this could be one of those vacations whch requires a vacation to recover from. Also, evil enemies of the Domination are stealing an Eiler-Hour tonight, due to Domination Sunlight Time (a.k.a. Daylight Savings Time, or DST). When the Domination comes to formal power, it'll be DST all year, and its citizens will be grateful to never lose an hour.

Operational targets have been re-evaluated to account for diminshing vacation time. Goal is, an easy drive tomorrow.

The armored force therefore advanced the Domination's frontline to the southeast end of the Quad Cities, but did not penetrate to the Rock Island Arsenal. Instead, Dixon-Illinois (being on the way back to EilerBase) was chosen as the day's primary target. Boyhood Home of Ronald Reagan - Free Admission!

Nearby targets of opportunity then emerged.

"Paddle Wheel Inn" of Oregon was chosen for barracks, due to the magnificent concrete statuary presence of Giant-Size Chief Black Hawk across the Rock River.

It's said to be the second largest concrete statue in the world, behind (one guesses) Jesus of Rio. The Domination splurged on a room with a view.

"Blackhawk Steak Pit" for dinner. It has a noisy Greek proprietor who doesn't believe in draft beverage or in fine American beer. And he had to be introduced to the concept of dining at the bar. The pork chops are certainly tasty, but would have been more so if the Domination had splurged for the mushroom sauce.

"Maxson's Riverside" for dessert. Its ambiance is fancier, but its menu and pricing is much like the Steak Pit, only less Greek content. And it has the Honker's Ale of Chicago on draft!

The Domination's expeditionary force is now just over an hour away from EilerBase. Tomorrow's operation should be trivial.

Domination day of resurgence. Today's operation was trivial enough, that the Dominator surprised his coalition partners by showing up for 10:30 am Kingdom-of-Heaven obeisance in the Core Territories.